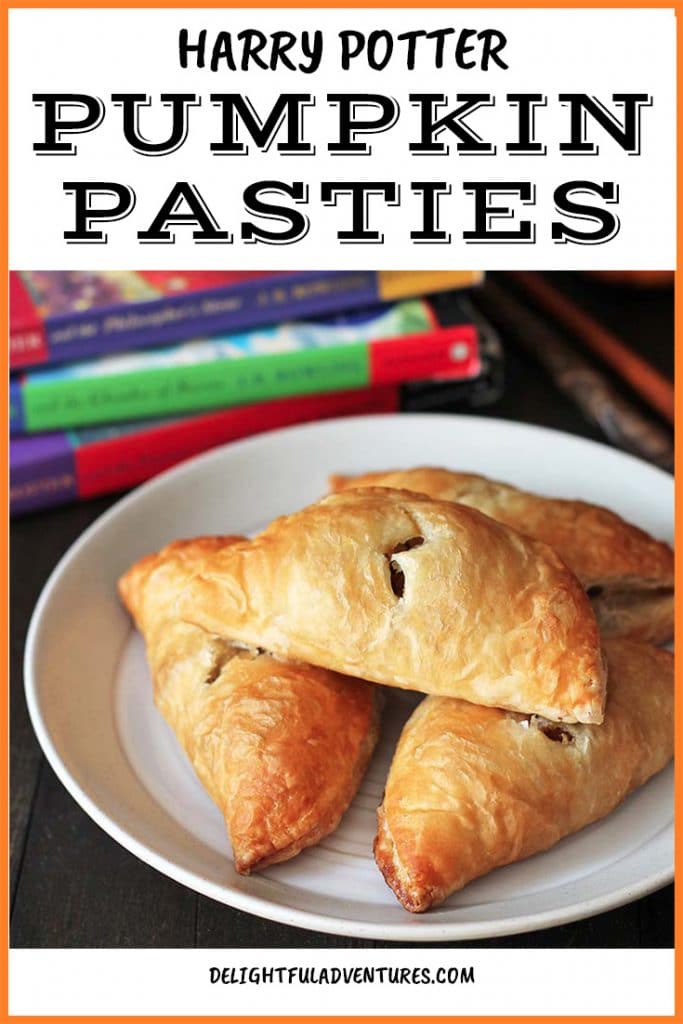 Curious about what pumpkin pasties from the "Harry Potter" series taste like? This is my take on the treat enjoyed by the characters in the books! 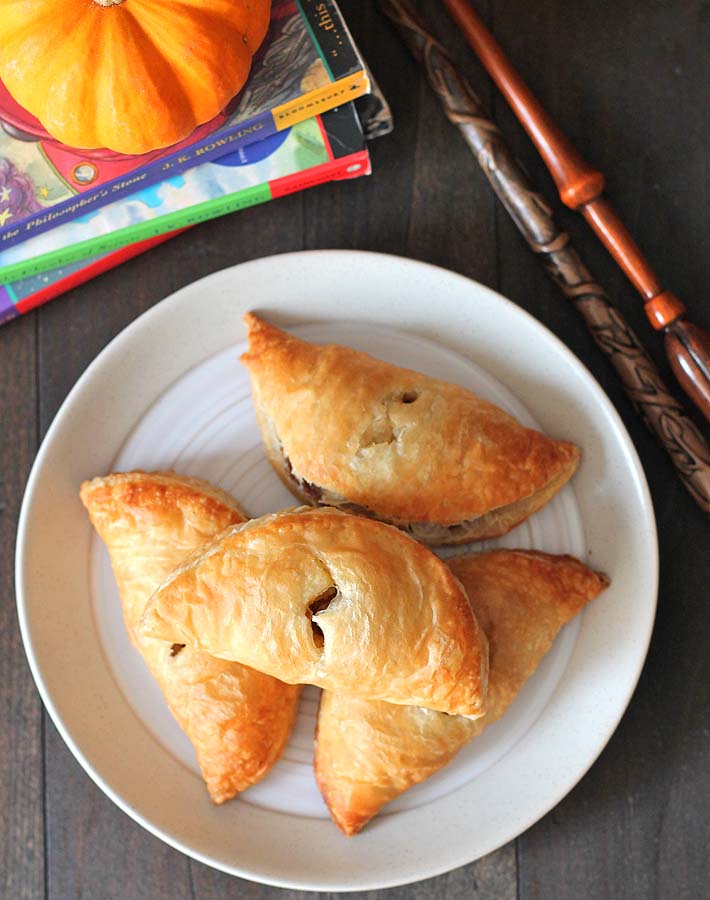 If you've read the Harry Potter series, you already know about this delight. If you haven't read the books and have never heard of a pumpkin pasty, then you're in for a treat with this simple pasty recipe!

Before I go any further, though, I do need to tell you that this is my take on what I imagine pumpkin pasties being like.

There are many Hogwarts recipes and treats mentioned in the Harry Potter books, and we just have our imaginations to rely on when it comes to the taste of things (mmm...butterbeer).

We don't even know for sure if the pumpkin pasties Harry Potter enjoys with his friends are sweet or savoury. I personally think they're sweet because they're sold on the Honeydukes Express which is the Harry Potter sweet trolley the kids buy sweets from on their trips to and from Hogwarts.

This easy to make pasty recipe is how I imagine the pumpkin pasties from the books, tasting like. My version also happen to be vegan. Vegan pumpkin pasties!

A Treat Inspired By the Book Series

We were lucky to visit Universal Studios Orlando this past summer, and Diagon Alley and Hogsmeade are...magical...for lack of a better word.

If you're a Harry Potter fan, as mentioned above, you know that the first time we hear about pumpkin pasties is while he's on his first journey to Hogwarts, on the Hogwarts Express (which we took a ride on at Universal!). 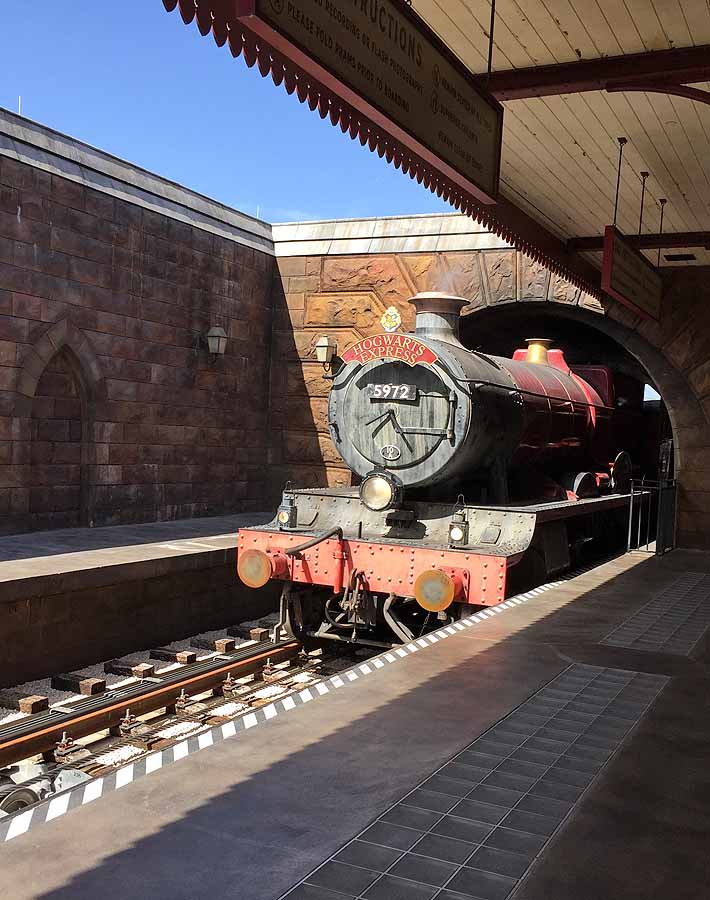 The Honeydukes Express is the food trolley on the Hogwarts Express. The Trolley Witch makes her way through the train, selling an assortment of treats to the kids on their way to wizarding school.

“What she did have were Bertie Bott's Every Flavor Beans, Drooble's Best Blowing Gum, Chocolate Frogs, Pumpkin Pasties, Cauldron Cakes, Licorice Wands, and a number of other strange things Harry had never seen in his life.” 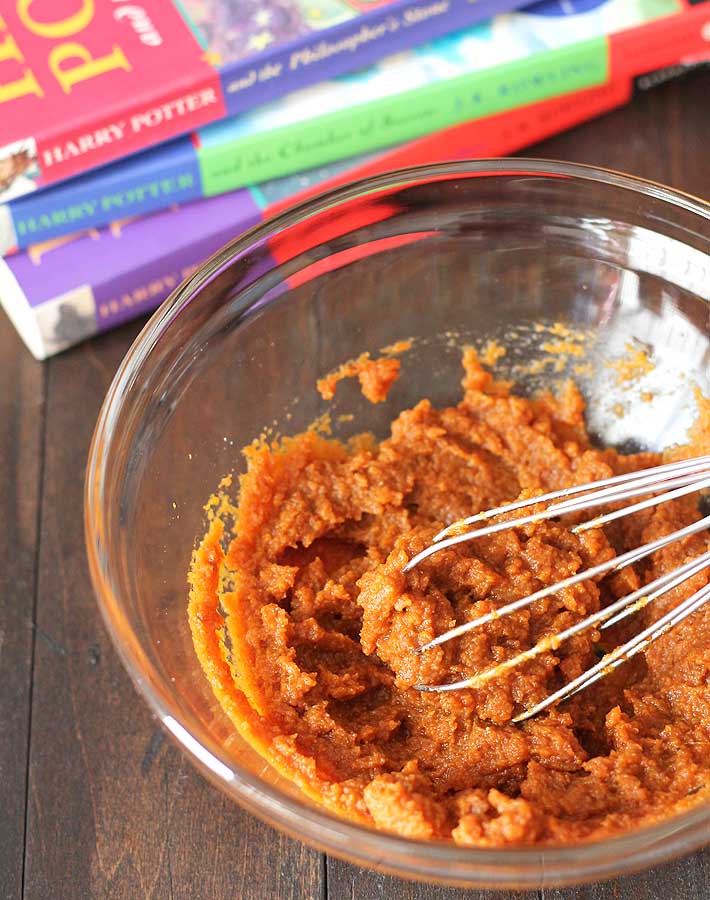 My kids just made their way through the books and movies and were as fascinated with the treats mentioned in the books, just as I was when I first read the series, years ago.

When we visited Universal Studios Orlando, they did actually have pumpkin pasties at Honeydukes for purchase (and a whole lot of other Harry Potter treats recipes!), but we couldn't have them because of cross contamination risk (food allergies), so we made some ourselves when we returned home.

How to Make Pumpkin Pasties

We all agreed that we imagine them tasting like pumpkin pie, so that's the direction I went in with this Harry Potter pasties recipe.

The filling is pretty much pumpkin pie filling and the outside is flaky, crispy, puff pastry brushed with a vegan egg wash to make it golden brown and pretty. It's a simple recipe for pasties that anyone can make, even kids (with some assistance when it comes to using the oven!). 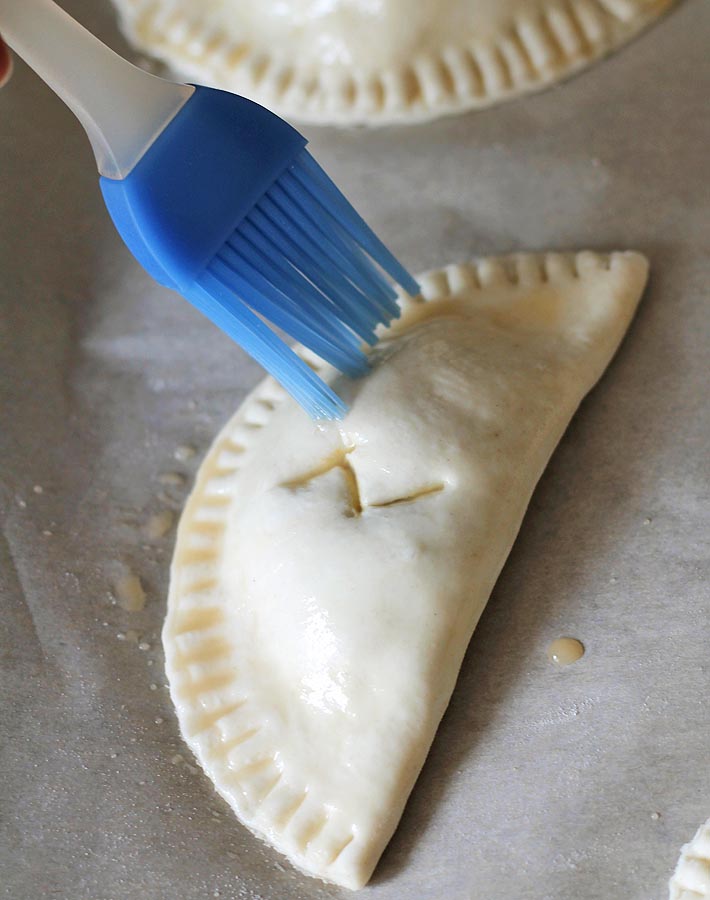 The pumpkin pasties we saw at Universal Orlando had the scars cut into them as well, so we did the same to give them that extra Harry Potter touch.

Pasties are not a new thing, I did a little reading and they're a UK food, and are very much like what we would call hand pies on this side of the world.

They're not usually made with puff pastry, like I have done, but rather a thicker pastry/dough.

They can also be made sweet or savoury and filled with a variety of fillings. These pumpkin pasties also happen to be vegan, something I don't think is usual with traditional pasties.

My version is probably breaking every pasty rule out there, but that's OK, because they're delicious. 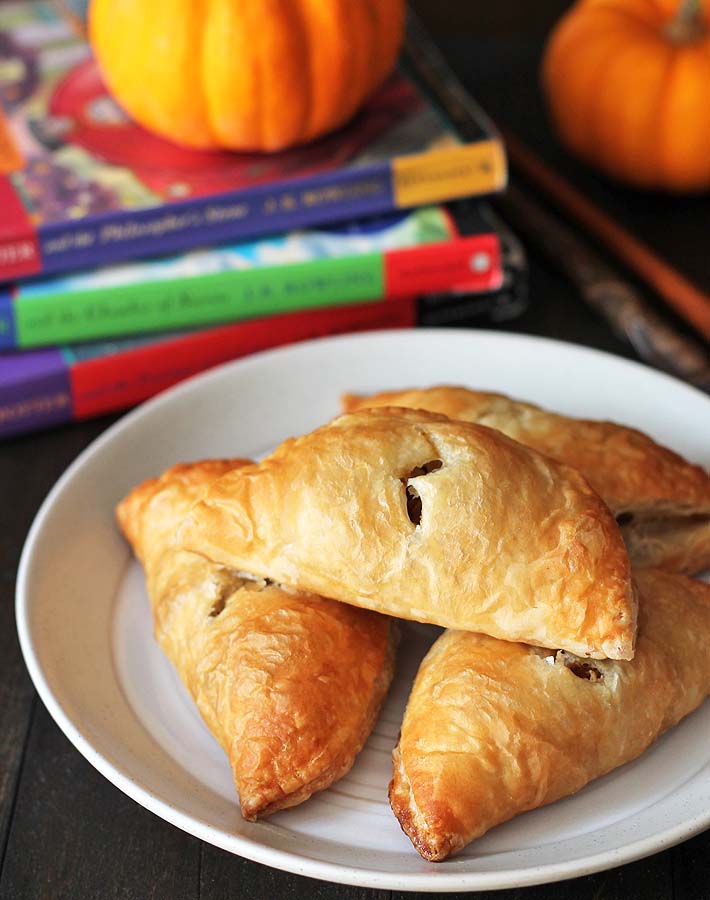 And in case you're wondering, they're pronounced past-ee not paste-ee (like I used to say!).

I hope you love my take on this delicious treat from the Harry Potter books, we make them often and they're a fun snack to serve at Harry Potter or Halloween themed parties, while making your way through the books (either by yourself or with your kids!), or...just because!

You can also help me to help others find this pumpkin pasties recipe by pinning it to your recipe board on Pinterest! Pin it now by clicking here! 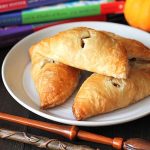 Curious about what pumpkin pasties from the "Harry Potter" series taste like? This is my take on the treat enjoyed by the characters in the books! These pumpkin pasties also happen to be vegan!
Prep Time:15 minutes
Cook Time:20 minutes
Total Time:35 minutes
Author: Gwen Leron
Course: Dessert, Snack
Cuisine: Vegan
Diet: Vegan
Servings: 4