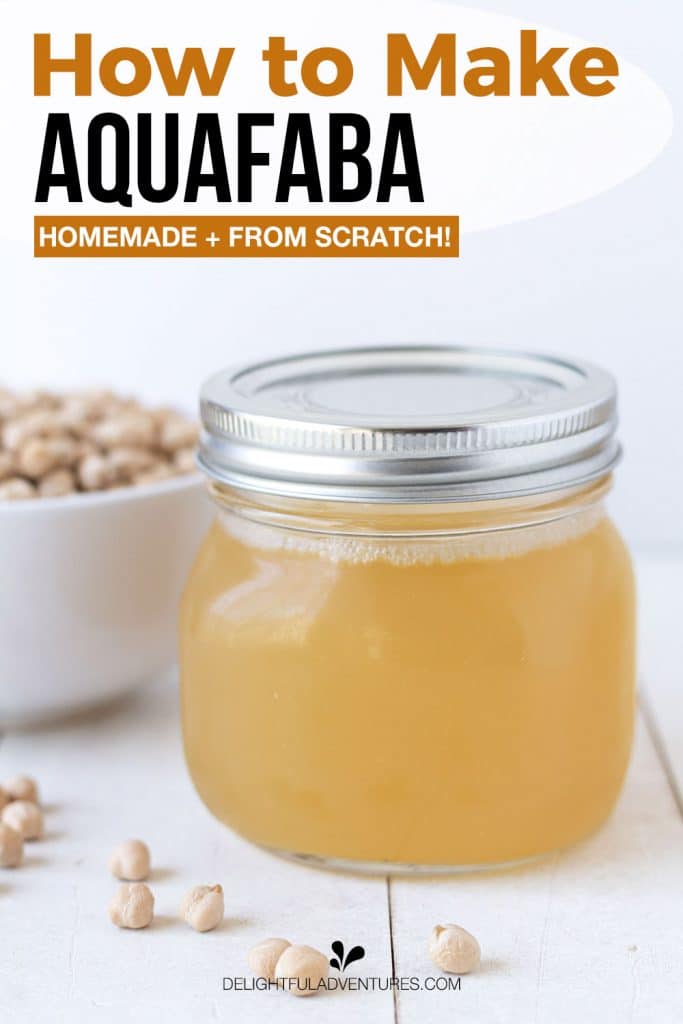 Have you ever wondered how to make aquafaba at home? This post contains everything you need to know, including how to make it from dried chickpeas on your stove top, in your Instant Pot / pressure cooker, AND in your slow cooker.

After reading through, you’ll have all the answers on making homemade aquafaba so you can skip the canned stuff!

If you've ever wondered: Can I make my own Aquafaba?, the answer is YES! Of course, the quickest way to get your hands on it is buying a can of chickpeas, but if you want to stay away from canned chickpeas, everything you need to know is below.

Aquafaba, (which is also referred to as: chickpea brine / chickpea water / chickpea liquid / chickpea juice /garbanzo bean water / bean liquid / vegan egg white) is an egg substitute and one of those odd ingredients that just appeared out of nowhere a few years ago.

If you've ever wondered who discovered it, both Joël Roessel and Goose Wohlt played significant roles in figuring out what it could do and in bringing it to the mainstream, you can read more about their contributions here.

I'll admit, I was very late jumping onto the aquafaba train, but once I got on board, there was no turning back. I now use it to make quite a few recipes!

Making it yourself is cheaper, you get way more than you would from a can, PLUS, you'll get the satisfaction knowing that you made it yourself!

Before I show you how to make aquafaba at home, let's go through a little bit of interesting background you may be wondering about.

Table of Contents show
1 What is Aquafaba?
2 Is Aquafaba Made Only from Chickpeas?
3 How Does It Work?
4 Before you get started...
5 How to Make It
6 Cooking On the Stove Top
7 Cooking In the Instant Pot / Pressure Cooker
8 Cooking In the Slow Cooker
9 Separating the Chickpeas from the Cooking Liquid
10 Refrigerate to Thicken
11 Can the Cooked Chickpeas Be Used?
12 How to Store
13 Defrosting
14 How to Use Aquafaba
15 How to NOT Use Aquafaba
16 How to Whip It
17 Aquafaba Recipes
18 Does it Smell Like Chickpeas? Will My Recipe End Up Tasting Like Chickpeas?
19 For Even More Info and Recipes...
20 How to Make Aquafaba

It's a magical ingredient that can be used as an egg white replacement in savoury and sweet vegan and allergy-friendly recipes.

You can use it to make things such as chocolate mousse, cakes, mayonnaise, whipped cream, coconut macaroons, meringues, royal icing, marshmallows, cocktails, as an egg wash, as a coating for crispy recipes, and SO MANY other things.

And why is it called aquafaba? Well, aqua = water faba = bean. Simple as that.

Is Aquafaba Made Only from Chickpeas?

My go-to has always been chickpeas because, while the liquid is a golden colour, when it whips up, it becomes white. The colour remains neutral in recipes and it has a mild smell and flavour that disappears in recipes.

How Does It Work?

No one fully knows that answer to this question, which is why I referred to is as "magical," above! It is thought that the proteins and starches from the chickpeas play a role but there are other factors at play that have not been fully researched. If you want to read up more on the science behind it, you can do that through this link.

If you're wondering how to whip it, see my post all about whipping and using an aquafaba egg replacement.

So now that you have all of these interesting facts to share with friends and family when you make them one of your aquafaba treats, let's get into how to make aquafaba!

Before you get started...

...there is one important rule you must follow in order for success and that is to make sure that all tools, bowls, spoons, whisks, pots, jars etc. that will come into contact with the chickpeas and aquafaba be free from any oil and oil residue. Oil will prevent your finished aquafaba from whipping.

I recommend using a metal or glass bowl to whip it and not plastic since plastic can be porous, not wash properly, and can hide oil residue.

How to Make It

(Note: I’ve outlined the step-by-step on how to make it here, but find the full recipe, ingredients, timing, and directions for all cooking methods at the end of this post.)

I've outlined the separate methods to make it (stove top, Instant Pot / pressure cooker, or slow cooker) and tested several times to streamline and simplify the method so you need the same amount of chickpeas and cooking water across the board.

There are a few different techniques for making aquafaba that you'll find, I find this method is the least complicated and easiest way. If you follow the directions exactly as they're written, you will have success, I have not had a fail with it yet.

No matter which method you choose to make it with, you'll start with the following steps. You can follow along with the images below:

1. Pick through your dry chickpeas to get rid of any pebbles or bad chickpeas.

2. Once that's done, rinse them, place in a bowl, cover with water and soak overnight.

3. After the chickpeas have soaked overnight, you'll notice that they have expanded. Drain the soaking water and give the chickpeas a rinse.

4. Place the chickpeas and cooking water in a pot, pressure cooker, or slow cooker. No need to add any salt, baking soda, or anything else. All you need in the pot is the soaked chickpeas and water.

Cooking On the Stove Top

After following the steps above, place the pot on the stove, bring to a boil, and then turn down to a simmer.

About That Foam On Top...

When cooking chickpeas (and plenty of other beans), you'll notice a layer of foam form on top of the cooking water. This is not aquafaba. It's not needed, so simply skim the foam off the top and discard it.

This is my favourite cooking method, simply because it's the most hands off of the three and because I find it produces the thickest, most viscous of the three methods, which makes whipping quicker.

Follow the standard steps above, and set the IP, walk away, and come back after the pressure has released.

Cooking In the Slow Cooker

Again, follow the standard steps above and set the slow cooker to either high or low heat using the timing mentioned below.

Once done, allow it to cool and then you're ready for the next step.

Separating the Chickpeas from the Cooking Liquid

After the cooling time has passed, you'll separate the chickpeas from the aquafaba by using a strainer as shown below. You'll then set it aside so it can fully cool off.

Straining will also filter out any smaller bits that broke off from the chickpeas while cooking. This is an important step because any bits left in your aquafaba can affect whipping later on.

You'll notice that the aquafaba is still quite watery at this point and you may wonder if it actually worked, not to worry. It's supposed to still be watery when you're at this stage, the real thickening happens during refrigeration, which will happen in the next step.

After the aquafaba has cooled, put it in a covered jar and place in the refrigerator overnight. In the morning, your aquafaba will be ready to use.

The final consistency should be similar to an egg white, a little slimy/viscous, not too thick, and not too watery.

Can the Cooked Chickpeas Be Used?

Yes! Because they have been in boiling and soaking in hot water for a longer period of time than what's usually needed for cooking chickpeas, they're going to be very soft.

Because of the softer texture, I like to use them for recipes like chickpeas salad sandwiches, vegan pinwheels, and hummus. They also work well in recipes that call for roasted chickpeas, like these BBQ veggies bowls.

If you have a recipe like a curry that calls for chickpeas, just add them to the sauce towards the end of cooking since they don't need to be cooked and only need to be reheated.

I store my aquafaba in a glass jar in the refrigerator, if I don't use it up within a week, I'll freeze what I have left in tablespoon portions in ice cube trays.

The trays I have hold one tablespoon per section, which is convenient. After they freeze in the trays, I remove the cubes and place them in a freezer bag.

I'll then write the date on the bag so I know how old they are. Frozen aquafaba cubes will last up to six months in the freezer.

When I'm ready to use them, I remove the correct amount of cubes I'll need, place them in a bowl on the counter and let them melt and come to room temperature. You can also thaw in the refrigerator if you aren't in a rush to use them or if you are in a rush, you can defrost them for a few seconds in the microwave.

How to Use Aquafaba

Use the following guidelines when using it as an egg replacement in baking:

When using, follow exactly what the recipe says to do, since each recipe is different. Some will have you whip it up to soft peaks, some to stiff peaks, some you will just need to beat until it's foamy.

It can also be used as a vegan egg wash for baked goods as well as a replacement for eggs when coating food for frying.

How to NOT Use Aquafaba

Like most vegan egg replacements (like flax eggs), it has its limitations. It's recommended to not use it as an egg replacement if you're trying to replace 3 or more eggs or egg whites (like in an angel food cake, for example). It works best in recipes that need to just have one or two eggs replaced.

Aquafaba will also NOT work on its own to make things like scrambled eggs, omelette's, or quiches. If you want to make one of those things, you will need a base for the recipe such as chickpea flour, tofu, etc.

How to Whip It

Now that you have a nice supply of aquafaba, you need to learn how to whip it! I outline how to do that and tell you everything you need to know in my aquafaba egg replacement post.

Homemade aquafaba on its own does have a mild chickpea small (canned chickpea aquafaba has a stronger smell) but the smell will disappear as you add it to your recipes. Your finished recipe will have no trace of chickpea smell or taste.

For Even More Info and Recipes...

Join the Aquafaba (Vegan Meringue - Hits and Misses!) group on Facebook where you'll find plenty of great tips, recipe ideas, and help if you run into any issues with aquafaba. 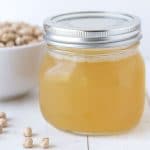 How to Make Aquafaba

Have you ever wondered how to make aquafaba at home? This post has everything you need to know about making homemade aquafaba including how to make it on the stove top, in an Instant Pot / pressure cooker, AND in your slow cooker.
Prep Time:5 minutes
Cook Time:45 minutes
Soaking + Cooling + Refrigeration Time17 hours
Total Time:17 hours 50 minutes
Author: Gwen Leron
Course: Ingredient
Cuisine: Gluten-Free
Diet: Vegan
Servings: 20

Make On the Stove Top:

Make In a Slow Cooker: