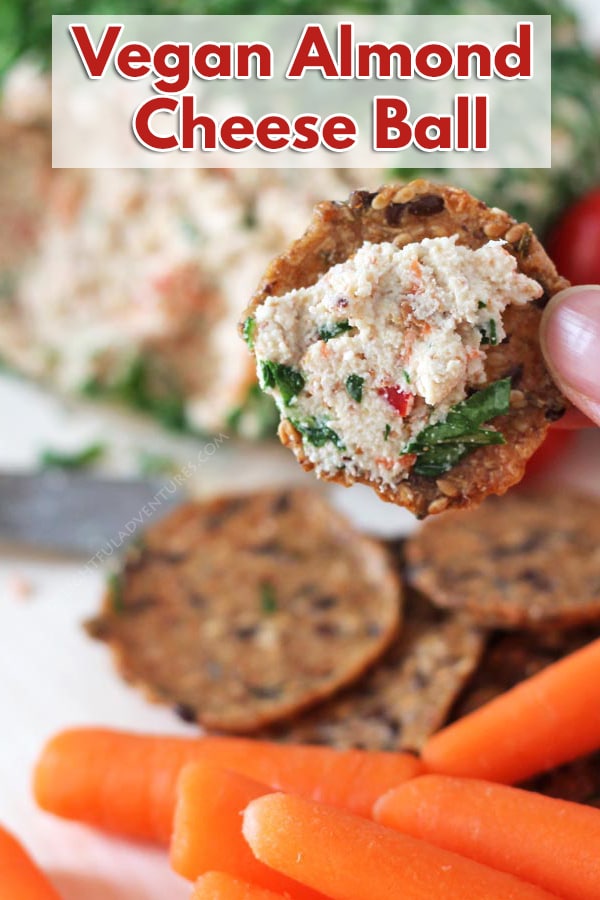 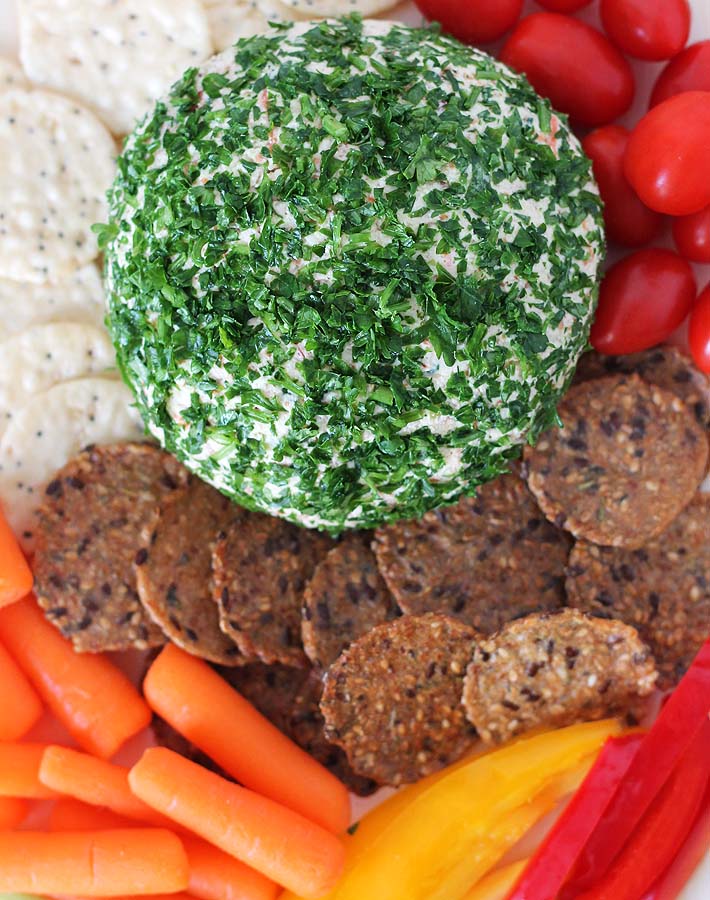 Back when I made my garlic herb vegan almond cheese spread, I thought that it would also be great as a vegan cheese ball but didn't really have any plans to actually make one.

But lately, I've been seeing so many of them in my feeds ('tis the season!), that I decided to revisit that recipe and adapt it to make a cheese ball. So here, we have my Vegan Almond Cheese Ball.

Most of the recipe you'll find are usually made with cashews, but because I cannot have cashews, I went with the next best thing...almonds!

Almonds don't get creamy smooth, like cashews, after you blend them, but that's perfectly fine because the texture works well with the chopped veggies.

So keep in mind that this vegan cheese ball is not going to be as smooth as a cashew-based cheese ball or a dairy cheese ball. 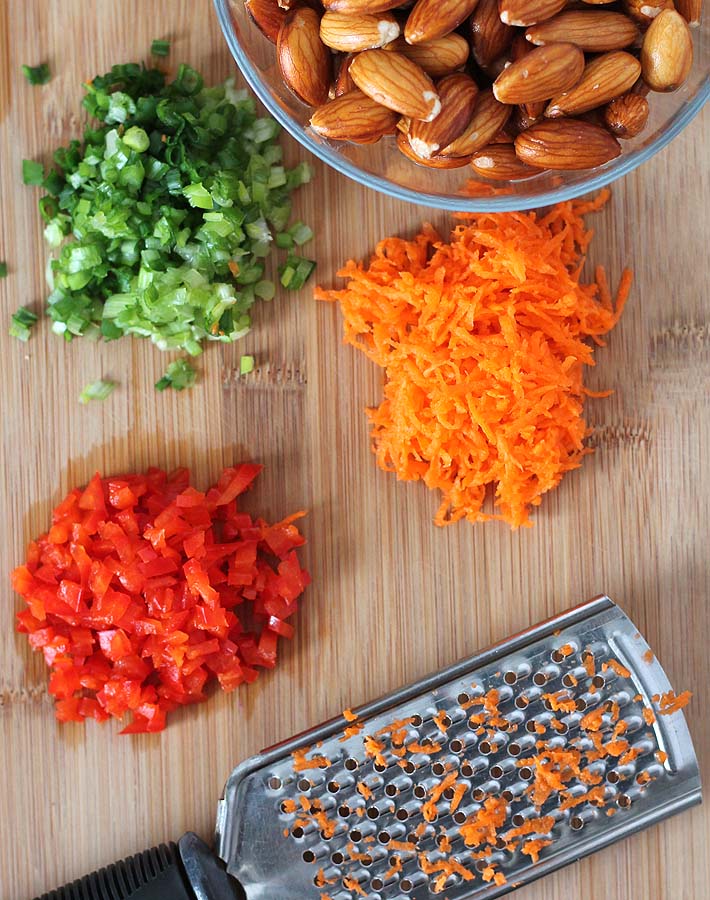 When I still ate cream cheese, my favourite kind was a specific veggie cream cheese from a small neighbourhood bagel shop.

They would make it on site and sell it in little containers so you could buy it to go with your fresh bagels. This one in particular had little pieces of different veggies in it and such a great flavour.

It has been many years since I had that veggie cream cheese, and I don't quite remember what the ingredients were, but I do remember how it looked, so I took a guess, based on memory, and went with that for my version.

The flavour is similar, but obviously, it doesn't taste like dairy cream cheese, what this vegan veggie cheese ball does taste like is a cheesy, savoury, nutty spread. Yum.

It's a very similar recipe to my garlic herb almond cheese spread, except this recipe has a few more ingredients. 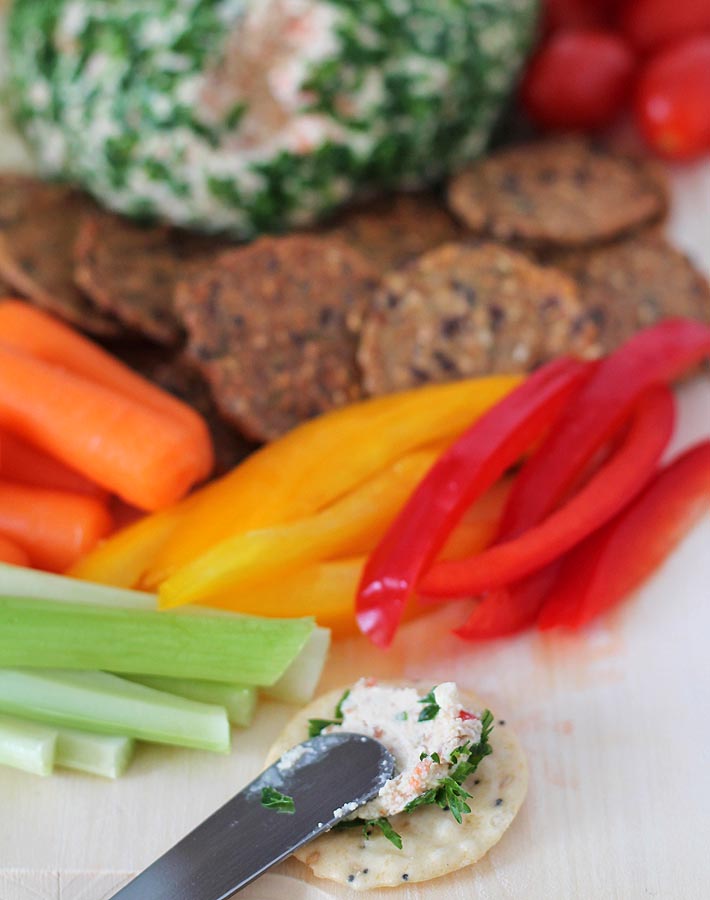 Can This Recipe Be Made Without Oil?

If you prefer to keep the recipe oil-free, you'll still be able to form it into a ball but it won't keep its shape and it won't be as firm. It will be more of a loose spread, which is perfectly fine and just as delicious!

What is the Best Coating to Use?

When it comes to the herb coating, parsley is a go-to herb for me in recipes, so that is what I chose to cover the ball.

If you prefer to use another herb like dill or chives, (both of which are perfect!), feel free to do so. 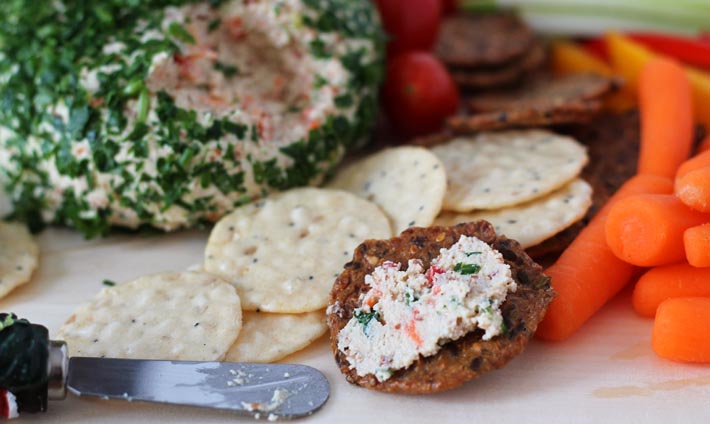 How Should It be Served?

Serve it cold and with anything you would serve with a regular cheese ball! Some ideas:

Those are just a few ideas, it's totally up to you based on your preferences. 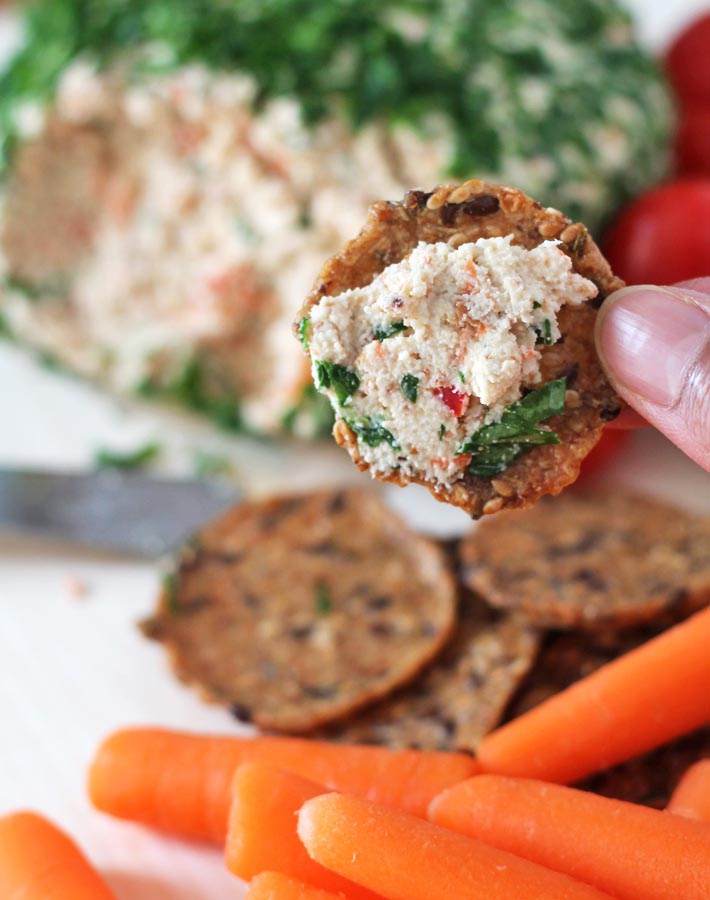 After I posted my almond cheese spread recipe, I received a lot of messages from readers, here and on Facebook, asking where they could buy the crackers in my pictures (the same crackers in the picture above this paragraph).

They are made by a brand called “Mary’s Gone Crackers.” They're a little on the pricey side for crackers, but they're worth it because they taste great and they're vegan and gluten free.

I have bought them from Costco, here in Canada, (I'm not sure if they're available in US Costco's) or you can also look for them at your grocery or natural foods store. You can also find them on Amazon.

And if you're wondering about the other crackers further up, those are rice crackers, and they're also vegan and gluten free 🙂

How to Make a Vegan Cheese Ball 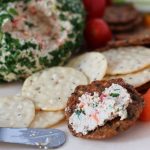