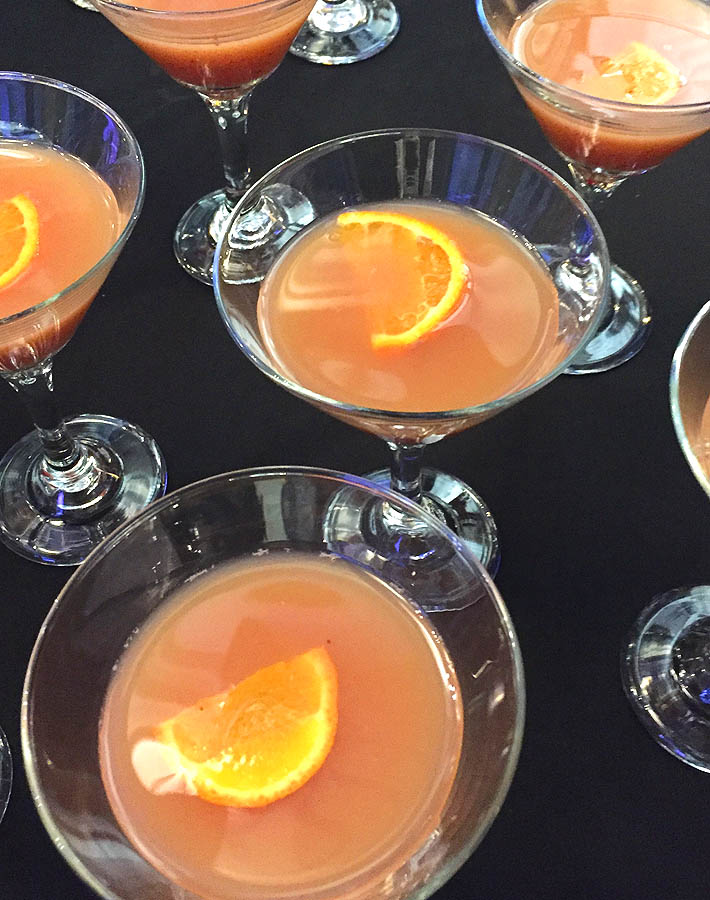 Not long ago, while scrolling through my Facebook feed, I came upon a post promoting an event taking place at the Canada Agriculture and Food Museum here in Ottawa. It was a maple workshop with Chef Lynn Crawford and happened to be part of a series of maple events at the museum. Since I knew this would be a sell out, I quickly got in touch with a friend to see if she was available (she was!) and we bought tickets the next morning. I’m so glad we did. Chef Lynn + maple? I’m in!

The evening was so well done and Chef Lynn did an excellent job demonstrating how to make her signature maple-themed dishes and drink. But before she started, everyone had the chance to enjoy a cocktail or drink that included maple. I chose to try the one in the picture below. I don’t know what it was called but I do know that it contained maple syrup, bourbon, and it was delicious.

Chef Lynn Crawford is probably my favourite Food Network Canada Chef. If you aren’t familiar with her, then you don’t watch Food Network Canada where she appears on MANY shows. She’s a judge on Chopped Canada, she’s been a contestant on Iron Chef,  and she was a chef mentor on Restaurant Makeover (there’s more that I’m missing!) You may have also seen her doing guest spots on talk shows, in commercials, or if you live in Toronto, you may have heard of (or been to!) her restaurant, Ruby Watchco.

My favourite show of hers is Pitchin’ In. Have you seen it? If not, you can watch all four seasons on the Food Network Canada website. The show followed Lynn as she visited farms that produce a particular ingredient. She would learn how they grew and harvested the ingredient and about some of the dishes it was being used in around town. At the end of the show, she would host a three-course meal, featuring the ingredient, for everyone who helped her out during her time at the farm. Each episode is a fun, quick watch. A few of my favourite episodes: Peaches, Cherries, Avocados, and Olives! (I had the chance to meet Chef Lynn briefly at the end of the evening and my one question was related to Pitchin’ In. Read on to find out what it was!)

Now, here’s the thing about Chef Lynn Crawford. From the short time I was in the same room with her, this is what I noticed: the same way she is on all of her shows is exactly how she is in person. She’s entertaining, she’s funny, and she kept the audience hooked and engaged for the entire two hours. It was nice to see.

I do have to apologize for the following picture (you know that I take my pictures seriously around here!) but I was seated all the way in the back corner of the room and snapping a decent pic on my phone without zooming in and ruining quality was near to impossible. 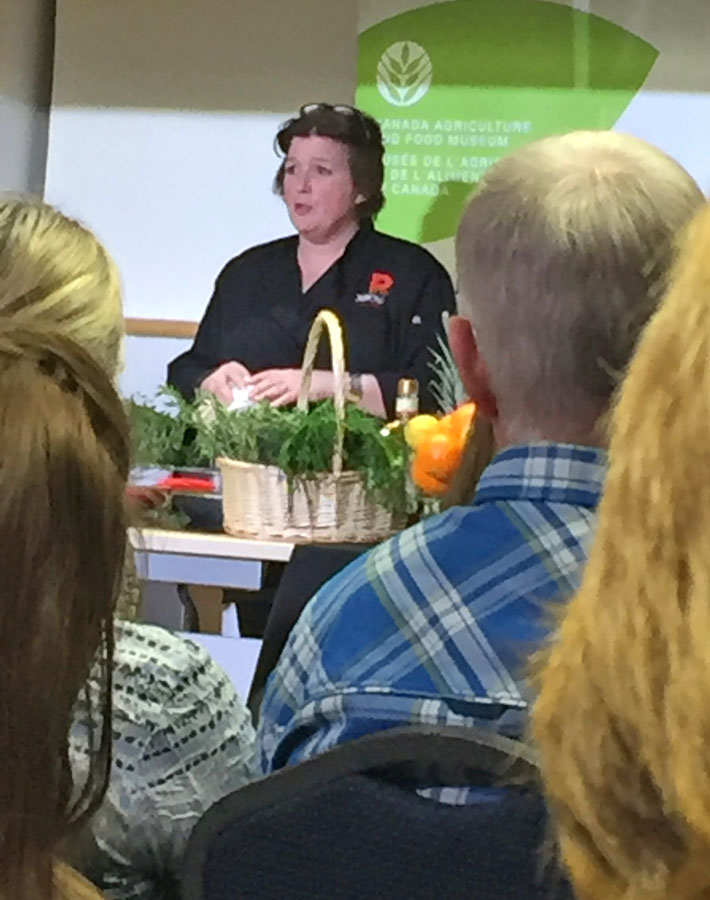 The evening started with a brief chat about maple and how it’s produced. She then went into the creation of her signature Boultbee Bourbon cocktail and her maple-themed dishes with help from audience volunteers. Luckily, for everyone attending, sample sizes of each dish were available if you wanted to try out what she made. Culinary students from Algonquin College were on hand to re-create her dishes for the entire crowd. Throughout the evening, Chef Lynn made the Boultbee Bourbon cocktail, Dukkah Spiced Cauliflower, Crispy Pork Belly with Maple Pineapple Mustard Sauce, and a Sticky Toffee Pudding with Maple Sauce.

So, are you wondering what question I asked Chef Lynn Crawford at the end of the evening? I asked “Is Pitchin’ In over?” I was wondering because it seemed to have just disappeared from the lineup on Food Network Canada and I was never quite sure if it was on hiatus, coming back, cancelled…no clue! Sadly, she confirmed it is over. No more new episodes. She explained that they ran out of ingredients to feature. She told me that they had done a little over 50 episodes and didn’t have anything else to feature. Which is too bad.

The Canada Agriculture and Food Museum is such a great place to learn about farming and food production. They always have so much going on. I’ve been going to this museum since I was little and I have visited with my kids as well. Luckily for everyone in the area, they have more of these types of events planned. They’ve teamed up with local restaurants and embassies to host monthly workshops to present international cuisines to attendees. Since the museum has partnered with Chef Lynn Crawford to promote food literacy across Canada, hopefully she will be back for similar events soon!

This maple event has inspired me to make more maple recipes that I’ll be sharing soon. In the meantime, you can check out my recipe for Maple Spiced Almonds or the many breakfast recipes I’ve shared that need to be topped with maple syrup in order to be complete. Enjoy maple season!

Hi! I’m Gwen and if you’re looking for easy-to-make, delicious plant-based and gluten-free recipes you’ll want to make over and over again, you’ve landed in the right place! Read more…